Top 10 Most Anticipated Anime of Spring 2015 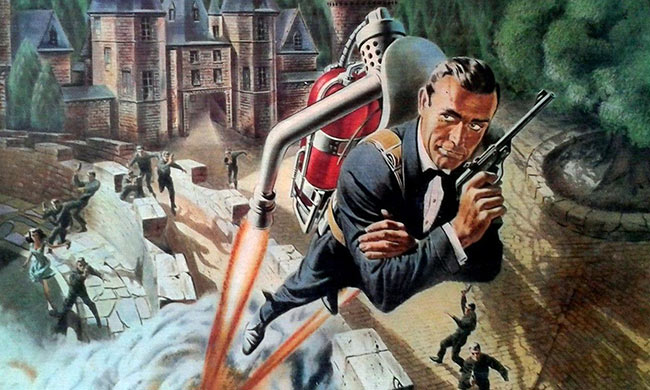 James Bond is well known throughout the world for a few different things: His womanizing personality, his exceptional skill set, and his penchant for impeccably tailored tuxedos. But perhaps what makes 007 famous more than any of these things are the gadgets that he received from the Q Branch of MI6.

Now, let’s be clear about one thing: Like the Bond movies themselves, many of the gadgets within the movies are ludicrous at best. For example, any gadget that 007 uses to disguise himself as an animal, whether it be seagull, manta ray, or alligator, is just ridiculous. But the fact remains that Bond has some truly epic gadgets at his disposal, and we are counting down the top ten of the coolest and most useful pieces of tech he has had the pleasure of using.

10. Automatic Safecracker (You Only Live Twice)

In You Only Live Twice, 007 uses this small and handy little device to break into a high-security safe in just a few moments. Using a complex system of magnets and microphones, the small lights would illuminate green to notify the user that a correct digit had been entered, allowing the cracking to move forward.

Bond uses a similar device in On Her Majesty’s Secret Service, but it’s massive size make it inferior to the You Only Live Twice version. Just be careful, because although the device can crack a code, it can’t disable alarms. Just ask Bond.

That’s right, the most useful piece of jewelry from Diamonds Are Forever has no diamonds whatsoever. Actually, to be honest, it’s quite an ugly little thing. But beauty is in the eye of the beholder, and the wearer of this ring will definitely consider it beautiful once they use it to win a jackpot at the slot machine. Every time. This slick and futuristic looking weapon fires out a fast and loud blue laser that easily dispatches any opponent. Now, is Moonraker the most plausible and realistic Bond film of all time? Probably not. But despite 007’s first and only foray into space being a bit of a bust, it does end in an awesome scene full of US Marines going to town with the newly designed Moonraker Laser. The second ring to appear on this list, and not the last one, is maybe one of the most realistic gadgets that 007 ever uses. Shockingly, the Ring Camera is a ring with a small camera embedded where a jewel would typically be.

Unfortunately, the Ring Camera probably became obsolete as soon as we could just snap a photo while pretending to look at fascinating Top 10 lists on our phones.

Bond uses this ring a few times during tense situations in Die Another Day. Simply put, this gold wedding band emits a sharp, high-pitched supersonic pulse that can shatter glass effortlessly. This even includes bulletproof glass.

In a real world application, maybe this ring could be used as some kind of high-tech, million dollar dog whistle.

Just when 007’s high-stakes poker tournament seems to be going so well, Le Chiffre gets his mysterious lady friend to poison Bond’s drink, and moments later, Bond sits in his car on the brink of death.

Luckily, he has just enough wherewithal to bust out the defibrillator located in the glove compartment of his vehicle. And even luckier still, Miss Vesper Lynd shows up to complete the defibrillation when Bond is unable to do so. After seeing next to no gadgets throughout Casino Royale and Quantum of Solace (except for the aforementioned defibrillator, of course), Skyfall saw the epic return of the Q Branch, and thus featured some slick, yet plausible gadgets. The most interesting of these is definitely the biometric scanner in the grip of Bond’s gun.

The scanner stops anyone except for Bond firing the gun by scanning the palm print of the user. If it’s not a match to Bond’s hand, the gun won’t shoot. Simple as that.

Read Also: 10 Actors Who Could Play the Next James Bond There are a few things that I am confident that every single person on this planet has dreamed of. One of those things is being able to teleport, but 007 can’t do that. The next thing is using a jetpack, and 007 has, indeed, done that.

Jetpack technology has actually been around for a long time. Since the late 50s and early 60s, actually. So come on, NASA! Where are our jetpacks? Each version of Bond has worn a different make of high-end timekeeping device. But, whether he wears a Rolex, an Omega, or a Seiko, one thing is for certain: Without a watch with plenty of gadgetry, a spy just isn’t a spy.

Bond’s watches have featured a vast array of aids. Cameras, lasers, explosives, garottes, and communications devices have all made their way into Q Branch’s wristwatches. So, it’s safe to say that without this gadget, Bond likely wouldn’t be the same. I shouldn’t have to make my case that Bond’s iconic Aston Martin DB5 is the best gadget of all time, but I will anyways. Ready? Revolving license plates, GPS, machine guns, oil slicks, bulletproof metal, tire slashers, and, of course, an eject seat. Do I really need to say anything else?

Much like the Q Branch’s return, the DB5 also made an epic comeback in Skyfall to the delight of pretty much everyone. Here’s hoping that this ultra classy and super useful car hasn’t made its last appearance in a Bond film.