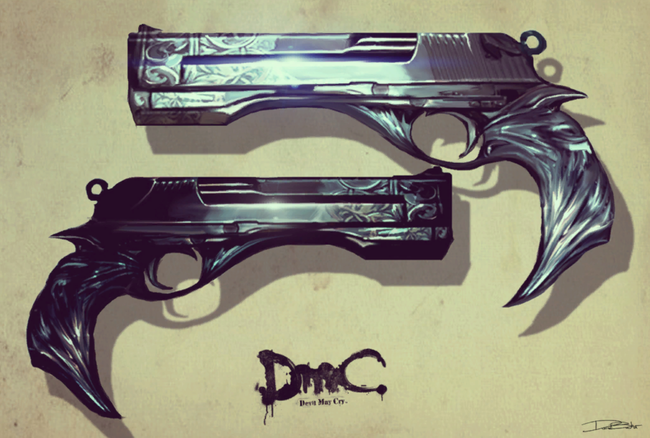 When you’re surrounded by zombies in the apocalypse what do you want with you? A gun? Perhaps a machete or fire axe? Maybe a machete, a fire axe, and a katana taped together. Whatever your weapon of choice is, there are some that exist in the realm of video games that stretch the imagination and bounds of normalcy. So we asked ourselves and the Twitter-verse, what are your favorite video game weapons? Then we compiled them into a list of the top 15 best of the best! The Type-33 Guided Munitions Launcher, otherwise known as the Needler, from the Halo series is one of the most commonly known gaming weapons. It is a Covenant anti-infantry weapon that discharges explosives. The best part about the Needler is it’s design, abrasive and beautiful simultaneously, showing the crystalline projectiles off at the top make for a lean mean Covenant machine. While the crystals don’t do much explosive damage when fired off in single rounds, once unleashed it as the capacity to do massive damage to opponents. The combination of aesthetics and sheer power is what got the Needler on our list of top video game weapons. Easily one of the most iconic gaming series, it is no surprise that one of the favorites is Link’s Master Sword from the Legend of Zelda franchise. Often referred to as the Blade of Evil’s Bane, it is known that only a true hero who has tested his courage may wield it’s power. It was crafted by Hylia as the Goddess Sword and later forged into the Master Sword by the goddess’s chosen hero and it’s spirit Fi. The Master Sword is the only weapon able to defeat the evil and villainous, Ganon. GIVE US HALF-LIFE 3! Anyway, one of the fan favorite weapons is the Gravity Gun from Valve’s Half-Life 2. There’s a number of reasons this weapon has made it on the list of the best, the main reason is right there in the name! It uses gravity to propel objects at your enemies, like the conveniently placed saw blades that seem to be everywhere. Players can also use the gun to create cover from enemies or maneuver around obstacles. All of these make the Gravity Gun a top competitor among the best video game weapons. Mario Kart is one of the best selling Nintendo franchises around with eight separate games across a multitude of platforms. Best played at a party or with a group of friends, Mario Kart gives competitive couch co-op a whole new meaning. When you’re sitting there with your friends, and one of them is just constantly winning and winning and you’re always finishing second, what do you want more than anything? You want the Blue Spiked Turtle Shell to lock on to them and blow them sky high, allowing you to come in for the win! That’s why the Blue Turtle Shell is one of video games best weapons.

Blades of Chaos: God of War Kratos is a fearsome warrior all on his own, he wears no armor and covers himself in the ashes of the dead. His main weapon is the Blades of Chaos, which were created by the God of War himself for a worthy servant. These intimidating blades are not only effective weapons, but also rich with mythology and story. Gaia, the Mother of Earth, once said, “The Blades of Chaos, forged in the foulest depths of Hades. Once attached the blades remained so, chained and seared to the flesh, a part of the bearer’s body. A permanent reminder of Kratos’ pledge.” Able to flail and throw the blades, Kratos can defeat any foe with ease, even the gods. The battle between Darkness and Light wages throughout the Kingdom Hearts series, and the most integral weapon of this battle is undoubtedly the Keyblade. Appearing in many forms this mysterious weapon is almost always wielded by main character, Sora. Despite the lack of a sharp edge the Keyblade is used as a sword would be, but also has the ability to seal or open barriers between worlds. Attaching keychains to the blade will alter it’s appearance and powers. It’s import to the story and world of Kingdom Hearts is something that cannot be overlooked when discussing some of the top weapons in gaming. Tamriel is a world of mystery and beauty. Spanning more than five different games and countless DLC, The Elder Scrolls series has become one of the most popular open-world RPG’s. In TES: V Skyrim alone there are hundreds of available weapons to choose from. Some can be crafted, others are found amongst the vast land, and still some are earned. There are seventeen Daedric artifacts in Skyrim, this counts the skeleton key from the Thieves Guild quests, and they’re all pretty interesting! But, without a doubt, the most interesting would be the Wabbajack. The Wabbajack is a staff that is acquired from Sheogorath during “The Mind of Madness” quest. What exactly does this staff do? Who knows! The Wabbajack has an unpredictable effect when cast. Sometimes it will light the enemy on fire, other times it will turn them into a chicken. That’s what makes the Wabbajack such an amazing weapon, it’s totally random. Everybody remembers their first time playing GoldenEye multiplayer matches, and getting killed by somebody with the Golden Gun. A seemingly unanimous favorite, the Golden Gun needs little introduction. While it may only hold one bullet at a time, there is no need for more. The one hit kill makes this one of the most powerful video game weapons to ever have existed. All you need is a steady aim. Terrifying, shocking, and downright gory. All this and more describes the Dead Space franchise to a tee. Known for it’s scream inducing scenes and horrifying monsters ready to make you jump out of your skin, Dead Space has an arsenal of “weapons” that is highly impressive. Playing as Isaac you have many and more options available for weaponry, such as the 211-V Plasma Cutter. Meant to be used as an engineering tool, this lethal amputator can save you from an all out necromorph attack. When fired in either a horizontal or vertical line the Plasma Cutter is an unstoppable force of limbless fury! Not only is the Gunblade one of the coolest looking weapons, it’s also an important one! A recurring weapon in the Final Fantasy series, the Gunblade is best known for it’s appearance in Final Fantasy VIII as Squall Leonhart’s weapon of choice. Squall utilizes the recoil from the revolver to create a deadly strike by thrusting him forward into the enemy. In later Final Fantasy games the Gunblade actually has the ability to fire projectiles which only makes it a more terrifying weapon. As GLaDOS once said, “Thanks to the Aperture Science Handheld Portal Device, the impossible is easy.” More commonly referred to as the Portal Gun, this “weapon” is one of the most unique and downright enjoyable of any other video game weapon. While it is not a lethal force, it is the most helpful gun you will ever wield. Giving you the ability to traverse obstacles like no other the Portal Gun really does make the impossible easy, all it takes is a little strategy and finesse.

YouTube Videos Help Gamers Get Better at Super Smash Bros. for Wii U and 3DS Dante, son of demon Sparda and human Eva, is a foul-mouthed and fearless paranormal mercenary, private investigator, and vigilante Devil Hunter. Somebody that badass needs some equally badass weaponry! Amongst his varying arsenal of melee weapons and specialty guns are his trademark pistols, Ebony & Ivory. The two M1911 handguns boast some pretty specific customizations; Ebony in the left-hand was modified for long range targeting and comfort, while Ivory in the right-hand was customized for rapid firing and quick draw speed. These two guns not only round out Dante as a truly unique character, but are also just plain impressive! When Manhunt was released on the Xbox and PS2, gamers were shocked. It was the epitome of fun and mindless violence, one of those games your mother would not be proud of. In fact the sequel was banned from certain countries and had to be reevaluated to fit within the rating parameters. All of this combined makes for one brutal game with unlimited options. One of the fan favorites is the little blue plastic bag, with which one sneaks up behind and enemy and suffocates them. Didn’t your parents ever tell you, “A bag is not a toy!” Nominated for various 2013 Game of the Year awards, Bioshock Infinite was a hit with fans of the series. The new colorful and interesting landscape of Columbia really lent itself to the way the game was played. Being an ex-spy, protagonist Booker Dewitt has many skills allowing you to choose how you battle in the game. You could choose to use your Vigors and unleash murderous crows, you could take the traditional route and use ranged weapons like guns, or you could use the Skyhook as a brutal melee weapon! Not only is it one of the most creative and fun ways to travel around in game, but also a deadly weapon used for execution kills at close range. The Skyhook is one of the best video game weapons in existence.