Farewell to the White Wizard: Christopher Lee Dies at 93 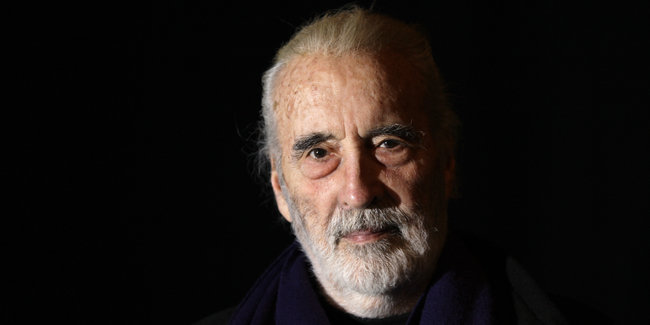 2015 strikes again. It hasn’t been a great year in terms of losing beloved superstars. We already lost Leonard Nimoy, B.B. King, and others. And today, sadly, we can add Sir Christopher Lee to the list. He died in hospital due to heart complications at the age of 93.

This guy was a freaking legend. He began his acting career with small roles back in 1946, and went on to be one of film’s most menacing and memorable bad guys. He was fluent in four languages and filmed more sword fights than any other actor, ever. You know who he was, and so does your mom, and your grandma, and maybe even your great grandma. Not too many actors can make that claim to fame. So to celebrate his life and his movies, we’re taking a look at the top 5 most epic roles of Sir Christopher Lee.

Sir Lee first gained real notoriety as a master of horror, playing in films like The Mummy (1959), I, Monster (1971), and The Wicker Man (1973). But his crowning achievement in the horror genre came in the form of his breakout role as Dracula in a series of films about the original vampire. There have been some awesome vampire performances since Lee’s role as Dracula, but his take on the character is pretty freaky.

While younger audiences certainly won’t be familiar with these old horror films, they are some of Lee’s best work and helped to define him as a guy who can play villains to perfection. Later in his life, Sir Lee would have the opportunity to play both Sherlock Holmes, and Holmes’s senior brother, Mycroft. But long before then, and even longer before Robert Downey Jr. and Benedict Cumberbatch made Holmes as suave as he is today, Sir Lee starred as Henry Baskerville in the film adaptation of what is probably the most famous Sherlock Holmes story. Leaning more towards a horror film than a mystery film, Henry works alongside Holmes and Watson to discover the truth behind the ferocious beast that is torturing the lives of those at Baskerville Hall.

If you’re interested in a Holmes adaptation that stays more true to the original story, this version of The Hound of the Baskervilles is definitely worth checking out. Sir Lee appears as Count Dooku in Star Wars Episode II, and then again, albeit briefly, in Episode III. Count Dooku is known throughout the galaxy as one of the finest swordsmen alive, and spent nearly his entire life as a Jedi, until his faith in the Order was lost, and he became a Sith.

Although Dooku doesn’t take up a lot of screen time, he is present for some of the coolest and most important events in the Star Wars prequel trilogy. He is the first person we see use a lightsaber with a curved hilt. he is the one who chops off Anakin’s arm, and he is the first person that we see Master Yoda fight against. Those events in themselves are enough to make Dooku irreplaceable, but wait! There’s more!

Dooku was trained by Yoda, trained Qui-Gon Jinn, was the first Sith we see use lightning fingers (for lack of a better term), and pushes Anakin into the Dark Side more than anyone except Darth Sidious himself. Epic enough for you?

2. Francisco Scaramanga (The Man With the Golden Gun) As a former KGB Agent, sharp-shooter, technological genius, and contract killer, Francisco Scaramanga is one of 007’s most worthy adversaries, and vice versa. Although he only appears in one James Bond film, like most villains,
Scaramanga is one of the most memorable of the lot, and saves a sub-par film from being terrible. The final shootout and game of cat and mouse between Bond and Scaramanga is one of the great moments in 007 history, and few scenes came even close to reaching that level of intensity until Casino Royale. Remember when you played GoldenEye for the N64 with your friends and you ended up with the Golden Gun, which would insta-kill anyone you shot? You can thank Sir Lee for that, I suppose.

Unfortunately, even with his awesome skill set and a nickname like “The Man with the Golden Gun,” Scaramanga is mostly remembered as “The Man with Too Many Nipples.” Pity.

1. Saruman (The Lord of the Rings Trilogy, The Hobbit Trilogy) The role of Saruman the White (or any other of a hundred different names for the character) is perhaps Sir Lee’s most important and noteworthy of all time. He was the only member of the cast of The Lord of the Rings to have met the author, J.R.R. Tolkien, and Tolkien wanted him to play the role of Gandalf if a film was ever made. Unfortunately, when the time came, Sir Lee was too old to handle the role of the famous wizard, so he ended up playing his enemy instead. Still, no complaints there. Saruman nearly destroys the races of elves, dwarves, and men with his armies of orcs and Uruk-hai.

One of my favorite stories about Sir Lee and The Lord of the Rings is when he was filming his scenes for the first Hobbit film. He was unable to make it to the set due to health concerns, so Peter Jackson, along with a few cast members, went to him instead. They filmed his scenes with a green screen and added him in post. Aidan Turner, who accompanied Jackson on the trip to film with Sir Lee, was apparently simply gushing in the presence of the mega star. Jackson and the crew had to pull Turner away from Sir Lee so that he would stop telling stories to the young actor, and so that they wouldn’t run out of time for filming.

Few actors have had, or will have, a career that matches the longevity and impact that Sir Lee’s career had. We will miss him, but we are grateful for the work he did! Now, if you’ll excuse me, I believe it’s time for a Hobbit/Lord of the Rings marathon.