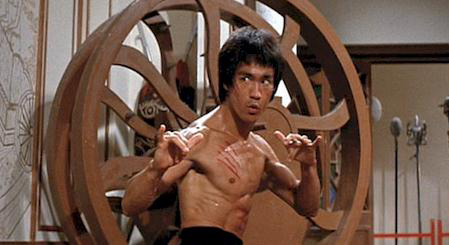 For today’s top 5, I take a look back in time at one of my favorite movie genres, Martial Arts! Now, there are literally hundreds, probably thousands of fantastic martial arts films from every decade, but here is a list of 5 films (some are series) that both newcomers and experts should enjoy greatly.

I felt like I should start the list off with one of the most obvious and legendary choices. Enter the Dragon is a staple of the genre, and literally no list of the genre can be complete with out. The film was made in Bruce Lee’s hay day and features some of the most exhilarating fights, well, ever. The storyline may have been nothing new, but it fits so well with the film’s central themes that it hardly matters. If you are looking for a good place to start in Martial Arts films this one is an easy to find and easy to watch recommendation.

The 36th Chamber of Shaolin

Just like Enter the Dragon, you can’t make a genre list without including at least one film from The Shaw Brothers. These guys have produced more kung fu/martial arts films than anyone else and they are what you’d consider “essential” viewing in terms of learning the history. While I could have picked any of dozens of films, I went with one of my all time favorites, The 36th Chamber of Shaolin. Not only is it one of the coolest, slickest, most fast paced offering around, it also inspired one of my favorite albums from the Wu-Tang Clan.

Switching gears a bit, we come to the first of my samurai film recommendations. The Lone Wolf and Cub series consists of six films, all of which are amongst my favorite films ever made. The story follows Lone Wolf, a disgraced Shogun Executioner who must live out his days as a killer for hire. Along for the journey is his baby son. Through six films we see the pair go through enormous amounts of danger, blood, women, lies and just a tiny bit of hope. If you can handle a lot of blood, I urge you to find this series immediately. You could also check out the film Shogun Assassin, which is a mix of the first two films in the series and utilizes a goofy english dub.

Master of the Flying Guillotine

Master of the Flying Guillotine is actually a sequel to another kung fu movie called One Armed Boxer (which is fantastic in it’s own right), but nothing beats the unadulterated mayhem and glee that comes from this film. Just imagine a smaller version of a hoola hooped lined with blades on the inside was around your neck, then one swift pull will decapitate you instantly by the tug of a chain. Thats what it’s like watching this film, and it’s an experience every genre fan needs.

The best way I can think to describe the massive Zatoichi series is by saying it’s essentially the samurai version of James Bond, but Zatoichi is always played by one, badass individual, Takeshi Kitano. The original series consists of 26 films, all of which follow a relatively similar flow but have different levels of emotion, humor, violence ex cetera. The entire series is available on Hulu Plus so if you love the samurai genre, this is a must watch. If you’re like me you’ll smash through film after film, laughing, crying and having a great time.

Hopefully these five recommendations spark your interest in the genre. Remember this is just a starting guide, always dig deeper and keep on watching!