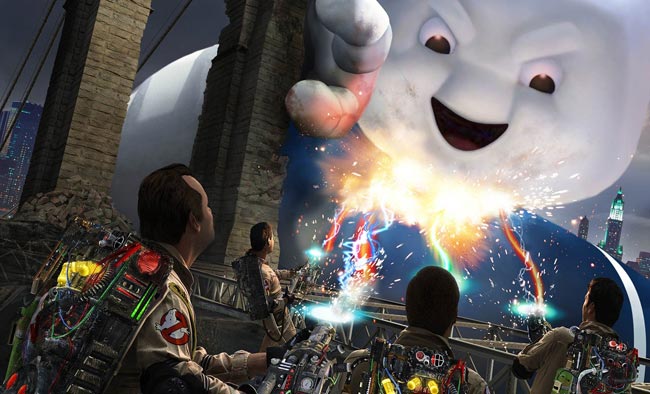 Top 8 Video Games Based on Movies

Video games and movies have a relationship about as solid as any of Taylor Swift’s relationships. Hollywood has tried time and time again to make a good film based on a game, and that has never worked out very well. But the opposite is also true. Countless games have been based on big budget films, and those typically suck too.

However, there are some gems in the pile of crap that is licensed video games. Admittedly, there are not many, but the few movie based games that are worth playing are pretty fantastic. I was originally going to give you a list of ten awesome games, but that wasn’t really possible due to there not really being ten. But, if you’re looking for a solid game to check out, here are eight options that set the bar on how to turn an awesome movie into a great game. For years, moviegoers have asked for a third Ghostbusters movie. That will likely never happen. But don’t be dismayed, because instead of a trilogy of films, we got this 2009 third-person shooter that acts as a sequel to the original movies. All of the original actors (Dan Aykroyd, Harold Ramis, Bill Murray, and Ernie Hudson) return to voice their characters, and the player controls a new recruit to the Ghostbusters team.

Ghostbusters: The Video Game does an awesome job at putting you right in the middle of classic Ghostbuster action, and incorporates various elements and characters from the films,like everyone’s favorite, the Stay Puft Marshmallow Man. It’s lighthearted and fun, and will help ease the pain of never getting to see Ghostbusters 3. Even though it was released for the Sega Genesis five console generations ago, Aladdin still stands as an awesome example of the charm and appeal of retro 2D platformers.

What makes Aladdin so great is the opportunity that players have to really experience the movie, and be in control of its characters. Many of the games on this list are loosely adapted from their Hollywood brethren, and have lots of extra content that isn’t in the movie. Not so with Aladdin. The backdrops are drawn by the same people that animated the Disney classic, and players are in full control of all the rope climbing, carpet riding, and street ratting that you could ever want.

In addition to Aladdin, and this is worth mentioning, the game based on The Lion King is another great Sega Genesis classic. What do you get when you decide to make a game based on all the events of Star Wars Episode I? A disaster. But what happens when you make a game about what is arguably the greatest part of the movie, and perhaps one of the coolest moments of all of the Star Wars films? You get Star Wars Racer, an extremely addictive and eye-watering racing game that focuses solely on the sport of pod racing.

There is no outside story trying to invade the action in this game. It’s just a pure racer, built entirely on its fast paced action, great level design, and awesome soundtrack. I logged countless hours on this game when it first came out, and continue to do so occasionally.

Star Wars Racer: Revenge was released for the PS2 a few years later, and features updated graphics, new game modes, and an expanded roster. Of the two games, Revenge is my personal favorite, but it isn’t based on any Star Wars movie in particular, so the original game makes the cut for this list. Legend tells of a game based on the first Spider-Man film that was a terrible and unplayable abomination. Actually, that’s not a legend, it’s a true story that I can confirm. Spider-Man: The Game was awful. Clunky controls, terrible plot, and limited movement all made it a miserable gaming experience. Enter Spider-Man 2.

Spidey 2 was the first experience I ever had with free-roaming, (mostly) open world gameplay, and tons of games, both bearing the Spider-Man name and not, have been modeled after this one. It has a life-size, open map of Manhattan that you are free to swing through to your heart’s content. Want to web spin onto a helicopter and take a ride through the city? Easy. Feel like climbing up the Empire State Building and seeing if you can survive jumping from the top? Go for it. Care to swing through the city, stopping petty crime as you do so? That’s all part of what makes Spider-Man 2 memorable and incredibly fun. This game, based on the barely passable film of the same name, practically reinvented the first-person shooter and brought the genre into the spotlight. Unless you had played Doom or Wolfenstein on your PC, chances are you had never played an FPS before GoldenEye. By today’s standards, the controls, graphics, and gameplay would be considered terrible. But by 1997’s standards, GoldenEye was groundbreaking, and it was the king of weekend slumber parties everywhere. Back when Midway was the master of action games, T2 reigned supreme in arcades across the globe. I remember playing it relentlessly when my family went to a camping resort that was incredibly boring, save for a small arcade with just a few machines. But it had T2, and I don’t even want to know how many quarters I spent on that game.

In the style of other popular games like Time Crisis and Virtua Cop, T2 is light gun first-person arcade shooter that tells the story of the movie it is based on. But, let’s be honest, in an arcade shooter, who really cares about the story? The real focus and gem of the game comes simply from gunning down terminator after terminator, doing your best Schwarzenegger impression as you play. T2 is simple in premise, but delivers tons of fast paced action and gun fun.

The Lord of the Rings: The Two Towers Very few adapted video games stay as true to their source material and provide as much fun as The Two Towers. Many of the actors from the movies reprise their roles in the games which adds even more authenticity to the titles. LOTR is action role-playing at its finest. You are able to choose between controlling Gimli, Aragorn, or Legolas, and later, Isildur. You gain experience through battles, level up, gain new abilities and combos, and generally mow down hordes of orcs while defending Middle-earth. Two Towers uses a unique blend of footage from the film and cutscenes, and contains battles from The Fellowship of the Ring as well as the second installment in the trilogy.

The Return of the King is also an extremely fun game and lets you control even more characters, like the hobbits and Gandalf, but I strongly prefer the gameplay and mechanics of The Two Towers. It’s simple and easy enough to play, but provides a real challenge towards the end of the game. Thank goodness for those start menu health and ammo cheats… No series has been able to reinvent and recapture the feelings and story of so many classic movies like the LEGO games have, often doing so without words.

The series started with the insanely popular LEGO Star Wars games and has grown to include titles based on Indiana Jones, Harry Potter, The LEGO Movie, Pirates of the Caribbean, The Lord of the Rings and The Hobbit, Batman, Marvel/Avengers, and most recently, Jurassic World. For the most part, the detail and attention paid to each game is worthy of the price of any AAA title. The LEGO games are easy to pick up, but often require some brain exercise in sorting out the puzzles necessary to progress the story. Each game has its own unique blend of storytelling and humor, and all of them are a lot of fun for the whole family.

The first installment in the LEGO Harry Potter series isn’t stellar, and neither is LEGO The Hobbit. But other than those two games, each LEGO game is a surefire winner and will provide hours of entertainment gaming.

What are your favorite movie based video games? We know there are more, but these ones are simply the best. Make sure to let us know which ones you enjoy playing the most in the comments.