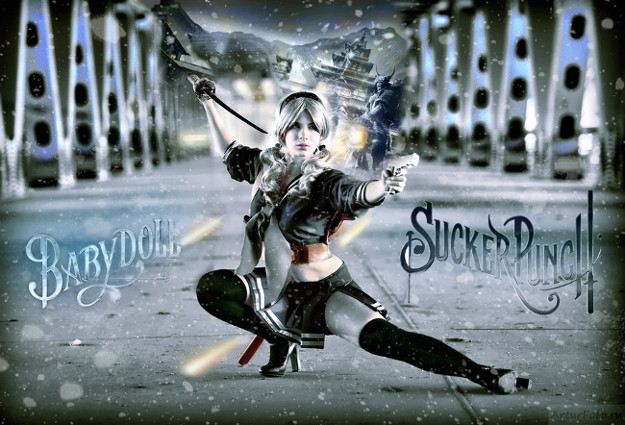 When it comes to taking down samurai giants, starving zombies, and highly skilled killer robots—no one can do it quite like Babydoll from Sucker Punch. She may seem tiny and fragile with her long blonde pigtails and her blue school girl outfit, but let’s face it; the girl really knows how to take a deadly blow while making it look as if it were merely a love tap.

With her exceptional ability to swiftly slice through her adversaries with a samurai sword in one hand, while blasting holes through the rest with a gun in her other hand, it is easy to see why Babydoll has been a top pick for several cosplayers to bring to life since its debut on the big screen in 2011. However, of all the Babydoll cosplays out there, Russian cosplay artist AnastasyaZelenova’s version has to be one of the most spot-on embodiments that we have ever seen!

Anastasya Zelenova definitely looks like Babydoll in her adorable navy blue school girl outfit! With her Samurai sword in one hand and her shiny pistol in the other, Anastasya Zelenova looks as if she is ready to take on anyone or anything that steps in her way. While Babydoll had to overcome plenty of turmoil to survive the wrath of Blue Jones, Anastasya Zelenova surly will not have to overcome any turmoil in order to earn the title of one of best Babydoll cosplays out there!