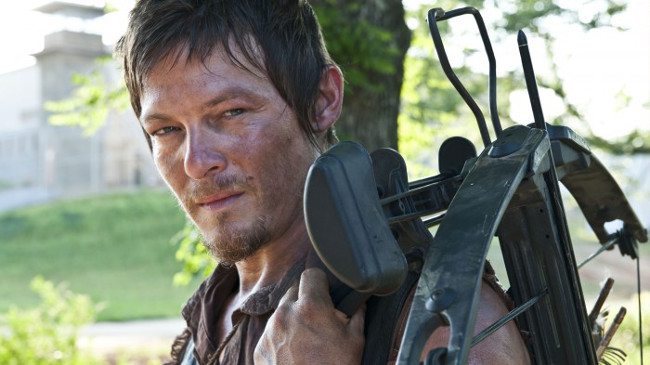 The subject of the enduring crossbow-wielding Daryl’s sexuality has been the focus of much teasing and speculating on the part of the series creators and the fans. There were certainly plenty of fans, and progressive entertainment viewers who got all excited when Walking Dead creator Robert Kirkman had mentioned that the possibility of Daryl Dixon being gay had been “discussed”. How diplomatic.

Get ready to hit your tumblrs, twitters and reddits again, internet. The Walking Dead showrunner Scott M. Gimple has a bit more detailed discussion of the characters (read: Daryl) in this regard;

“We know all sorts of things about the characters that we haven’t revealed,…we’re not holding back information on Daryl’s sexuality as any sort of big reveal. The fact that there’s still a question as to what Daryl’s orientation is in Season 5 absolutely speaks to Daryl’s character; he is a very guarded, very closed-off individual in a lot of ways.  We have been able to see him ever so slowly open up and show the other characters aspect by aspect as to what makes him tick. That’s been a very satisfying journey for all of us on the creative side to portray. [And] he’s still on that journey…This is a character who is going to continue to grow closer to the other characters, [and] let his guard down, and let them see just who he is, in every way.”

Hmm, probably not enough for fans to stop speculating. And there is always headcanon. I do like the point about Daryl’s orientation still being a question speaking as to his complexity as a character. For those not hell bent on Daryl turning out to be gay, Gimple does say that the show is going to introduce an out gay male character in the upcoming fifth season of the show. Good news!