Cosplay DIY: Dye Your Own Fabric 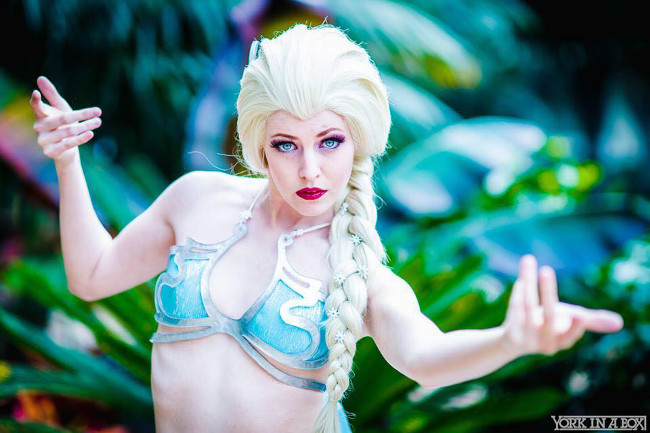 When one thinks of Queen Elsa the movie Frozen automatically comes to mind — especially since she was the deuteragonist of the title. Also known as the Ice Queen, Elsa has ice manipulation powers and her ability is one of the focal points of the film. While most might think of the harsh winter when it comes to the blonde, they might not easily think of the opposite. Good thing cosplayers are creative, and Maid of Might is heating up Elsa in a way we’ve never seen before!

No longer does Elsa don her famous dress made of ice, instead she’s swapped it out for something a little less modest. Some might remember Star Wars — who am I kidding most know about that franchise fan or not, and for those who think of the movies fondly then they’ll remember a certain Princess Leia in a certain slave outfit. Swap Leia for Elsa and you’ve got the stunning Maid of Might’s crossover cosplay! Not only are the details of Elsa dead on — the blonde locks and stunning make up, but the intricacies of Leia’s outfit are also executed masterfully. The gold and red hues are replaced with blue and silvers, adding a Frozen flare to a classic. Photos by: York In A Box