This Corpse Bride Cosplay Will Never Fade Away 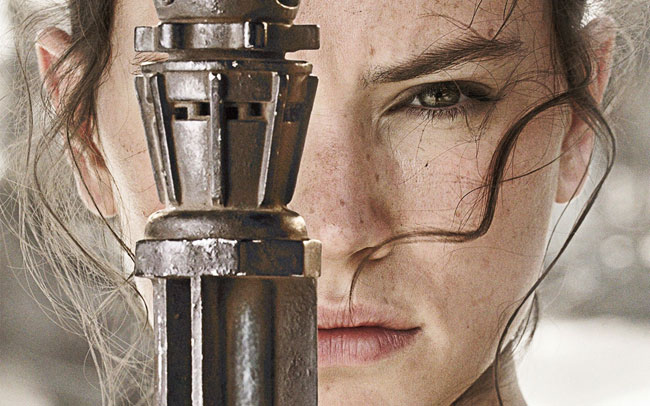 If you’re like me, you just can’t get enough of The Force Awakens. And perhaps the very best part of Episode VII is everyone’s new favorite Jedi, Rey. Rey is powerful and mysterious, and her unknown origin story is one of the most talked about topics on the internet over the last month.

So let’s join the discussion. Who is Rey, and where does she come from? There are multiple theories to explain her genesis, and all of them hold some promise. But which one is true? You decide. This, of course seems like the obvious choice and the most simple explanation. All the clues are there, and it seems like J.J. Abrams and crew have gone to great lengths to make sure that Rey resembles Luke from Episode IV in almost every way: Rey’s robes look like Luke’s clothing when we first see him on Tatooine, her desert planet upbringing is, again, just like Luke’s, Luke’s lightsaber “calls” to Rey (according to Maz Kanata), and Rey is very powerful with The Force.

If this is the case, it is likely that Rey lived with her father, Luke, during the time that Kylo and the Knights of Ren slaughtered Luke’s Jedi school and all its students. Presumably, to protect Rey from her evil cousin Kylo Ren/Ben Solo, Luke would then have left her on Jakku, in the far reaches of the Galaxy, just as Luke was left on Tatooine as a young child.

But there are a few problems with this theory that would need to be explained properly before it is entirely believable. First off, why doesn’t she remember her parents? During Rey’s lightsaber trip/flashback, we see her being left on Jakku, and she looks to be around five or six years old, which is more than old enough to know who her parents are, and who left her on Jakku. Even further, when Finn first tells Rey about the map leading to Luke’s location, she responds with “Luke Skywalker? I thought he was a myth.” Unless she has been totally brainwashed, the name “Luke Skywalker” and its mythical status would not have been so shocking to her if, indeed, Luke is her father.

It also just seems out of character for the Luke that we know to just straight up abandon his daughter. Regardless of the fact that he screwed up with training Kylo Ren (though I doubt that Kylo turning to the Dark Side is really Luke’s fault at all), you’d think that Luke, the most powerful Jedi in the Galaxy and a man who has learned the importance and power of his family, would keep his child close by rather than leaving her alone.

Yet, this still seems like the most plausible explanation, and considering the fact that Star Wars has always been, and will likely always be, a Skywalker family drama, Rey being Luke’s daughter just makes sense. But! Who is her mother? We’ll just have to wait and see…

Rey is a Kenobi Now, here’s a theory that has taken the internet by storm. And, to be honest, it makes a lot of sense, although there are some issues with it. It is entirely possible that Rey’s lineage could be part of the Kenobi family tree.

Exactly how she would fit into the Kenobi family line is a bit hazy, though. She is too young to be Obi-Wan’s daughter, since she wouldn’t be born for another fifteen or so years after Obi-Wan’s death. But she could potentially be a granddaughter, so let’s take a look at the clues that point to Rey bearing the Kenobi family name.

As I stated above, Luke’s lightsaber calls to Rey, making her the rightful heir to the weapon. But let’s not forget who gave that lightsaber to Luke in the first place. Obi-Wan held on to what was then Anakin’s former saber for the entire interim between Episodes III and IV. Therefore, Obi-Wan had that lightsaber for a longer time than did Anakin and Luke combined. Plus, how cool would it be if another Kenobi handed that exact same lightsaber to Luke again, 34 years after Obi-Wan originally gave it to Luke?

Only two good guys in the history of Star Wars have had British accents: Obi-Wan and Rey. Every other British character has been a villain, and this is telling, since other actors from the U.K. (Liam Neeson and John Boyega, specifically) have played protagonists, but have used American accents rather than their natural accents. So why would Daisy Ridley get to keep her accent when John Boyega had to ditch his? Maybe it’s simply because Finn is the son of another Star Wars character with an American accent (yes, I am implying that Finn is Lando Calrissian’s son), or maybe it’s because Rey is inextricably tied to the only other Jedi with a British accent: Obi-Wan Kenobi.

Finally, let’s dive in, once again, to Rey’s flashback/vision/whatever that moment was. We hear some sound clips of Luke and Yoda, both drawn from the original trilogy. We also hear the voice of Obi-Wan speaking to Rey. Both the actors who played Obi-Wan (Ewan McGregor and Alex Guinness) address her, and tell her, “Rey, these are your first steps”. This line of dialogue is crucial, because while we hear Luke and Yoda during the flashback, they are simply just sounds ripped from previous movies, and don’t directly speak to Rey. But J.J. and crew took the time and effort to bring McGregor into the sound studio just to record that single line of dialogue, so that Obi-Wan could deliver a personal message to Rey. Why go to the trouble unless it is vitally important to the series? There are a number of Jedi who could have told Rey that she was beginning her journey as a Jedi, but it’s Obi-Wan, and no one else. If nothing else, it’s a compelling argument.

Rey is a creation of Darth Plagueis Alright, let’s get to the less plausible but still interesting stuff. If fan theories are to be believed, then the new big bad villain, Supreme Leader Snoke, is actually Darth Plagueis, the Sith who trained Emperor Palpatine in the Dark Side of The Force. In Episode III, Palpatine tells the vulnerable Anakin that Plagueis learned how to cheat death, but that Palpatine eventually killed Plagueis. But, if Plagueis could cheat death, who’s to say that he didn’t survive Palpatine’s assault?

Not only did Plagueis learn how to cheat death, he was also so powerful that he was able to influence The Force to create life. This is how Anakin was “born”, if you will. Plagueis manipulated the midi-chlorians (though let’s not use that word again) to essentially impregnate Anakin’s mother, Shmi. And in Episode I, when Qui-Gon Jinn asks Shmi who Anakin’s father is, Shmi tells Qui-Gon that there is no father.

But how does this apply to Rey?

If Snoke is indeed Plagueis (which means we would have to ignore Snoke actor Andy Serkis’ statement about the character), maybe Plagueis saw how powerful his first creation, Anakin, became, and decided to try his hand at creating life a second time. Maybe Rey is another creation of Darth Plagueis.

In a way, this would still continue the family drama that makes up the Star Wars narrative, since Rey, as a creation of Plagueis, could be considered a sister to Anakin, and an aunt to Luke. A weird thought, I know, but nothing is out of the realm of possibility in Star Wars.

Also, who’s to say that Plagueis is the only Force user powerful to create life? We have very little idea what Luke has been doing for the last thirty years. Maybe he can now influence The Force to create life. Who knows?

Rey is the Chosen One “But Anakin was the Chosen One!”

It might be a bit out there, but remember: This is Star Wars. And Rey being the Chosen One doesn’t exclude her from being Luke’s daughter, Obi-Wan’s granddaughter, or a creation of The Force either.

So what do you think? Who exactly is Rey? Let us know in the comments!