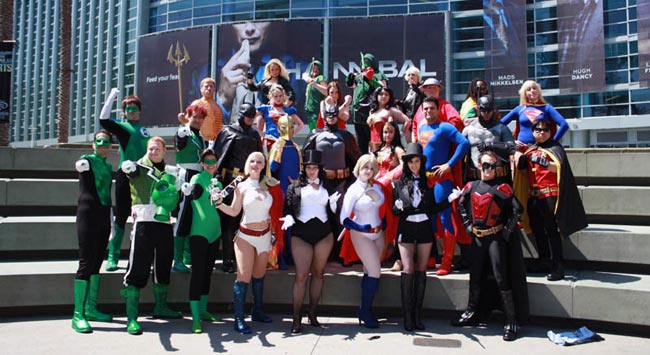 WonderCon Anaheim is coming this weekend, and there will be so much to see and do that it might make your head spin. This year, you can expect some exciting panels, signings, collectibles and amazing cosplays everywhere you look.

In case you’re wondering what will take place at this epic event, we have assembled a list of the highlights below:

Noon: What’s Hot in YA Fiction! – Series such as “Twilight,” “The Hunger Games” and now “Divergent” proved that young adult fiction can be golden. Here YA authors including Alyson Noel, creator of “The Immortals” series, talk about what’s new and hot in the field.

Noon: “Salem” – The new series set during the Salem witchcraft craze gets a sneak peek with some of its creators there to talk about it. And, one audience member will win a background part on the series as well as a trip to film it.

12:30 p.m.: Spiritual Themes in Comics – With “Noah” and other biblicly themed movies doing well this year, this panel looks at places where comic books and religion intersect.

2 p.m.: “Frozen”: The Art of Story – The Oscar-winning animated film was a huge hit, so expect this panel, which features four story artists from that film and others talking about how its art was created.

2 p.m.: The Men Who Made Batman – This year is the 75th anniversary of the creation of Batman, so it’s natural that WonderCon should have a sizable representation of the Dark Knight. This panel looks at his origins on the comic book pages. (At 4 p.m. you can also catch DC Comics: Batman, a panel on what’s ahead in the comics.)

6 p.m.: Greatest GEEK movies of 1984 – A panel to celebrate films released 30 years ago including “The Terminator,” “Gremlins,” “Repo Man,” “Ghostbusters” and “Purple Rain,” among others.

6 p.m.: World Premiere: “Son of Batman” – The new animated Batman film gets its debut at WonderCon.

7 p.m.: Wil Wheaton and Felicia Day panel – The king and queen of the Nerd Prom talk about their upcoming projects including the new season of the online board-game series “TableTop” and Day’s new paranormal comedy “Spooked.”

7:30 p.m.: How to Break Into or Expand Your Career in Hollywood – The Winner Twins, Brianna and Brittany, host a panel on how to do just what it says in the title – and what they’ve done with books, scripts and producing. Other panelists include actor Richard Hatch of “Battlestar Galactica” and MMA fighter Rampage Jackson.

10:30 a.m.: That ’70s Panel – This one talks about what made some comics in the ‘70s so great. Includes creators who worked on the likes of “Superman,” “Swamp Thing,” and “The Tomb of Dracula” during that decade.

11 a.m.: Lion Forge Comics – The publishers talk about their new all-ages imprint which plans to do comic book versions of TV shows including “Saved By The Bell” and “Punky Brewster.” Actor Dennis Haskins, aka Mr. Belding from the TV series “Saved By The Bell,” moderates.

Noon: Comics and Women – A serious panel about how women characters are portrayed in comic books and how they could be portrayed in different ways.

1:30 p.m.: Hanna-Barbera History – Meet some of the guys who brought you classic shows such as “The Flintstones,” “Yogi Bear” and “Scooby Doo.”

3 p.m.: Spotlight on Kelly Sue DeConnick – Writer on popular series such as “Avengers Assemble” and “Captain Marvel,” DeConnick brings a strong female voice to a world where men have dominated for decades. She talks about her career here.

4 p.m.: Spotlight on Peter Straub – The popular author of supernatural fiction talks about his career, creating both traditional novels and graphic novels, too, and his relationship with horror writer Stephen King.

5 p.m.: Cartoon Network: Adventure Time – The quirky and very popular animated series returns for a second year to hold a panel for fans at WonderCon. Expect a crowd.

6 p.m.: Godzilla at 60: The Making of a Movie Masterpiece – It’s not just Batman who’s celebrating a big birthday. The might monster from across the Pacific is old enough to get the senior discount at the movies now.

6 p.m.: XYZ-Punk: With the continuing popularity of the steampunk mash-up of fantasy genres, what’s next? This panel looks at some options including – we’re not making this up – Nerfpunk and Rococopunk.

7 p.m.: Toonstock with Warner Archive Collection – This panel focuses on some vintage music-themed animated TV series. You may remember “Josie and the Pussycats,” but we’ll bet very few of you recall “Butch Cassidy and the Sundance Kids.”

7:30 p.m.: Flashback to the Slash Pack! Inside the Minds of Michael Myers, Freddy Krueger and Jason Voorhees – Real doctors consider real questions such as, “Did ‘mommy issues’ and bullying birth a brutish butcher?’ and, “Who is the most dangerous killer, and which, if any, would be considered insane?”

8:30 p.m.: WonderCon Anaheim’s 10th Annual Masquerade – The annual costume contest will be hosted this year by Ashley Eckstein, an actress and the founder of Her Universe, a female-focused line of clothing for the nerd in every girl. Added bonus: She’s married to former Angels’ baseball favorite David Eckstein.

11 a.m.: Marvel: Breaking Into Comics the Marvel Way – A panel of Marvel veterans talk about how you can go from fan to Marvel employee: Hard work, talent, luck and this panel will help.

Noon: Cover Story: The Art of the Cover – Artists who’ve worked on everything from “Superman” and “Wonder Woman” to “Star Wars” talk about what makes a great piece of cover art.

Noon: The Nerdist Panel – Chris Hardwick, who’s broken out of nerd fame to mainstream recognition thanks to hosting “The Talking Dead,” hosts this panel on all things nerdy.

12:30 p.m.: Sex, Love & Superheroes – We’d make a lame joke about Action Comics here but this is actually a serious look at the way male and female characters have conducted relationships from Action Comics No. 1 in 1938 when Clark Kent asked Lois Lane out on a date through the entire history of comics.

1 p.m.: GEEK Guide to Summer Movies – GEEK magazine hosts this panel on the movies you’re all waiting to see, such as “The Amazing Spider-Man 2,” “X-Men, Days of Future Past,” “Maleficent,” and “Guardians of the Galaxy.”

1:30 p.m.: Dark Horse: Whedonversity – The comic book publisher talks about future plans for its popular series of comics based on Joss Whedon-created TV series such as “Buffy the Vampire Slayer” and “Serenity.”

1:30 p.m.: Spotlight on Katie Cook – Among other credits, Cook is the main writer on the comic book series “My Little Pony: Friendship is Magic.” Expect all the bronies to be at this one.

2 p.m.: Cosplay 101 – Here’s where you’ll get all the tips and tricks you need to make that next costume just perfect.

2:30 p.m.: The Future of Battlestar Galactica – Actor Richard Hatch, who played roles on both the original “BG” and its remake, appears on a panel that promises special guests to talk about the future of the franchise. Sneak peek at the “Battlestar” documentary will be shown, too.