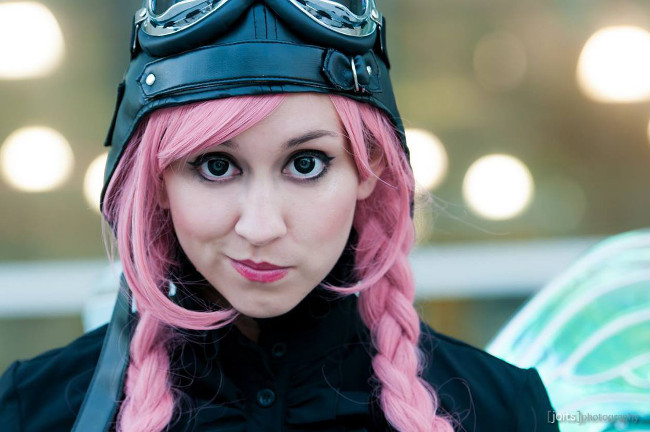 Megan Gwynn, better known as Pixie, is a sweetly spirited Welsh teenager in the X-men Universe with lovely pink hair. After her mutant powers were activated through a bicycle accident in her home town, Megan received a scholarship to study at the Xavier Institute for Higher Learning. There she became a member of the Paragons training squad and was a cheerful student, well liked by her peers, and even voted “Friendliest Student.”

Pixie was so named for her beautiful, rainbow wings and ability to use a glitter-like “pixie dust” that causes hallucinations in living creatures that come into contact with it. For a time, she remained mostly a background character, though was given more substance in the Quest for Magik story arc. In Limbo, she was selected as the most innocent soul, and thus ideal for use in creating a new Soulsword. The process was thankfully interrupted, leaving Pixie holding a small Souldagger, and 1/5 of her soul replaced with black magic. In Limbo she also learned a powerful teleportation spell, which, while not always perfectly employed, did help her and her fellow X-men on multiple occasions. Over time, she gained a great proficiency of the spell.

Pixie eventually became a full fledged member of the X-men, appearing often in the Uncanny X-men series. The black magic inside her soul has turned parts of her pink hair black and tarnished the appearance of her gossamer wings (note: this varies from artist to artist). Pixie’s Souldagger also played an important part in subsequent story arcs, and when used, brings out a darker, angrier nature that’s inconsistent with her usual temperament. This sweet temperament was continually tested, as in further battles in Limbo where she lost even more of her soul. For the most part, Pixie seems appreciate her genetic mutations, seeing them as a gift – especially her ability to fly. As she matured and endured various strife, her powers were enhanced and her personality became more resolute. As a hybrid mutant and fairy, Pixie is a special young woman in the X-Men Universe. Her wings are said to be linked to her psychological condition, sometimes appearing dark, while other times as light and beautiful as when she first joined Xavier’s school.

This steampunk incarnation of Pixie by November Cosplay wonderfully captures Pixie’s cheerful attitude and inner light. Personal interpretations of canon costumes and looks are a wonderful part of the creativity of cosplay, and this adorable adaptation is really well done. November Cosplay includes a Steampunk, aviator-style version of the helmet Pixie wore when she was still learning how to fly, complete with goggles. The metal version of Pixie’s gauntlets are a beautiful touch, as is the leather belt with iconic X buckle slung to the side. Of course, we’d be amiss not to mention the gorgeous corset, era-appropriate ruffled blouse, and adorable, frilly shorts. All together, this is a solid Steampunk look, and a fabulous cosplay. November Cosplay chooses to keep Pixie’s hair a pretty shade of pink while adding a degree of damage and wear to wings. Perhaps her version of Pixie has some darker thoughts dwelling behind the friendly smile? Only she knows for sure. What we know is that the excellence of this cosplay is no hallucination. No pixie dust is needed to swoon over November Cosplay’s excellent work.