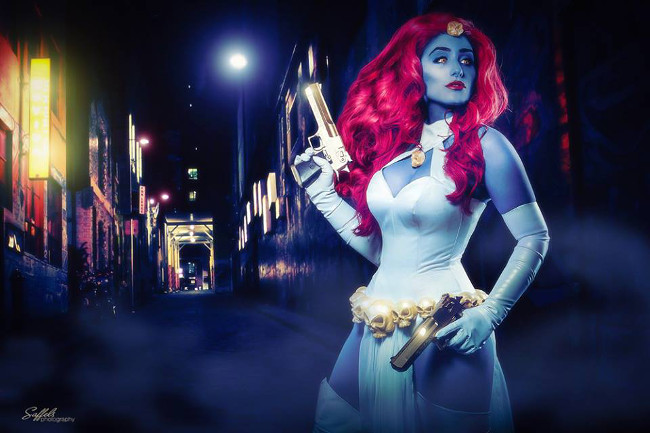 X-Men Week: This Sexy Mystique Cosplay Really Has that X-Factor

Raven Darkholme is one of the most beautiful women in all of the Marvel comics universe, arguably, one could say, because she can actually look like any woman in the world. This sexy shape shifter uses a collection of creative disguises while preforming her evil deeds, but her most typical appearance is that of a curvy and attractive blue-skinned redhead with piercing yellow eyes that seem to tell her complicated life story with just one look.

Raven, better known by her codename Mystique, is a powerful mutant with exceptional powers. In addition to her shape shifting, she also possesses gifts of healing and a slower rate of aging, keeping her youthful and beautiful for hundreds of years. In the X-Men comic universe, Mystique has always been a popular character due to her strength, powers, and unique appearance. Usually playing a villain to the X-Men, Mystique has also joined their ranks from time to time as she does ultimately share their desire for equality for mutants alongside the rest of the world. She is, however, willing to do whatever it takes to achieve that equality, even wipe out the rest of humanity entirely. Mystique wears a plethora of different costumes and sometimes, nothing at all. This has given talented cosplayers a surplus of designs to choose from when replicating Mystique’s commanding presence. One of the most classic outfits is her white dress, which over the decades of comics has been re-designed over and over again but remains a fan favorite. LA cosplayer Jessica LG’s interpretation of Mystique in her classic white costume may just be one of the best ever done. Not only does Jessica capture Mystique’s beauty and sex appeal with ease, but she also manages to project the perfect mixture of strength and sadness in those yellow-gold eyes. In a stunningly accurate cosplay, the intricate beauty of the skull belt adorning her waist is just one of many examples of her attention to detail while crafting. Paired with stunning photography by Saffels Photography, Jessica has embodied Mystique perfectly in a cosplay that will go down in history as one of the best. This Juliet Starling Cosplay is as Sweet as Candy